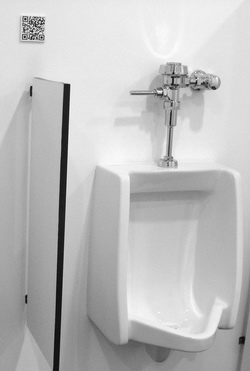 QR (or quick response) codes are a wonderful invention. Even if you have never heard of a QR code, you have probably seen one. They look like this.

The idea is pretty simple. First, visit your carrier’s “app” store to download a free code reader application. After doing so, you can snap a picture of any advertised QR code, which will then redirect you the marketer’s website.

There are plenty of acceptable places for companies to place these codes. They are embedded in advertisements found in magazines, on signs, on the bus, etc. For example, after MOMS Fine Foods returned to UW Bothell last month, they placed campus-wide advertisements, all of which included QR codes, directing readers to their menu.

But now we get closer to the issue. See, QR codes are great, but placement is critical.

Any guy who has needed to relieve himself on campus has probably seen the newsletters posted above each urinal. This is a great idea for several reasons, one being that I enjoy having something to read while going to the bathroom. However, therein lies the problem. These newsletters contain advertisements for MOMS. All MOMS ads have QR codes. There is a slight issue here.

Maybe it isn’t a slight issue. There are plenty of reasons why this is wrong. First of all, when a guy is standing at a urinal, he is not likely to reach for his phone to take a picture. He is going to the bathroom. His hands are occupied. But ignoring that first issue, many other problems arise if you actually consider what would happen if a guy did take out his phone midstream.

There is a reason people wash their hands after using the restroom. He’s not going to wash his phone, yet he’s probably going to put that phone to his face the next time he gets a call. And that’s just gross.

According to WebMD, by not washing your hands after using the restroom, you can contract E. coli, hepatitis, the common cold, or a bunch of other illness that I can neither pronounce nor have any clue as to what they are. So if you touch your phone before washing your hands, well…just don’t do it. That guy better not let anyone else touch his phone. Ever.

This problem is not limited to the men’s restrooms either. Sources tell me that QR codes can be found in the women’s restrooms, as well, although that is not a rumor I can personally confirm. Despite all of the health issues related to using a phone while in the bathroom, it is never acceptable to take a picture in a public restroom. That is just creepy. And if there is someone out there that does this, please stop. You are creepy.

While we can all appreciate QR code technology, we also understand that it’s easy to get carried away with these things. It happens. Let’s just agree that restrooms are not the best place for QR codes and move on.